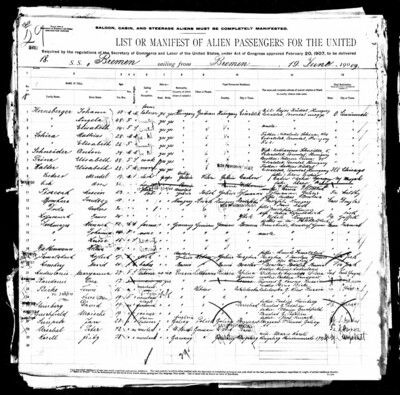 A ship's manifest for the SS Bremen, which departed from the port of Bremen in Europe on June 19, 1909, shows the name of Passenger No. 13 as "Duda, Andras." It is believed that this Immigration Services record from Ellis Island refers to Andrew Duda, Sr. It has been documented that Andrew sailed to America in June of 1909 and that he then traveled by land to Cleveland, Ohio, where he boarded with his wife's sister and brother-in-law until he could find work and other lodging. It is known that, because of communications gaps caused by language barriers, such manifests sometimes contained errors (misspelling of names, etc.). In this case, the age of the passenger was noted as "30." Andrew Duda, Sr. was born in 1873 and would thus have been 36 at the time of this voyage. His father's name was "Jan," although the manifest lists the passenger's name as "Janos." The explanation for this variance may lie in the fact that Slovakia (at that time) was part of the Austro-Hungarian Empire. Hungarian versions of personal names and locations were, thus, commonly used by government officials. The intended final destination of Passenger No. 13 is unclear (perhaps omitted entirely). The recorder(s) of this manifest crowded information relative to a given passenger onto the line above or below his name. Despite these problematic issues, it is deemed likely that "Passenger No. 13" on the SS Bremen voyage originating in Bremen on June 19, 1909 was, indeed, the same Andrew Duda who ultimately became the patriarch of the Duda Family, a founder of the Slavia Colony Company and St. Luke's Lutheran Church and also of the corporation which still bears his name: A. Duda and Sons, Inc. Image from US Immigration Service records, Ellis Island.