Young Andy Jakubcin (in Photo Taken c. 1956) at the Intersection of the Current Slavia Road and SR426 in Slavia 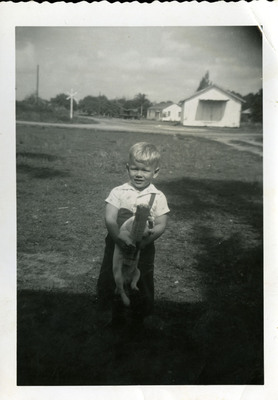 Young Andrew John (Andy) Jakubcin, holding his little puppy and a rolled up newspaper, c.1956. Andy, son of Emily and Andrew Jakubcin (who had passed away just three months before the birth of his son) is standing in the front yard of his home and is looking eastward. Behind him is State Road 426 (then only a narrow, two-lane road), running from left to right in the image. Perpendicular to the state road is a clay road (railroad crossing sign visible) which was...at that time... called Red Bug Lake Road. A wooden warehouse (owned by A Duda & Sons, Inc.) sits on the NW corner of the intersection and behind it is a home owned by the Paul Lukas, Jr. family. By 2011 this intersection looked very different: SR 426 had become a five-lane road; a traffic light had been erected several years earlier to handle heavy traffic; the Duda warehouse was gone (although the small Lukas building remained). Red Bug Road had been realigned to connect with Mitchell Hammock Road, and the small portion shown in this image was renamed "Slavia Road." It is interesting to note that, according to several oral history accounts, the very first "turpentine shack" church (c. 1913-1920) was probably located very near the spot occupied by the Duda warehouse in this image. By some accounts, the floor of that first deserted shack (set aside by the settlers as a special worship space)"fell down" during a worship service one Sunday (OR "the building slipped off the concrete blocks which held it"). For a time, the settlers resumed the practice of holding Sunday services in their own homes and then probably used boards from that first shack church in constructing another building (c. 1920)which they erected on the site currently used for a church cemetery. 3x5 B&W snapshot, scanned on Epson10000XL at SLLC, 2011.