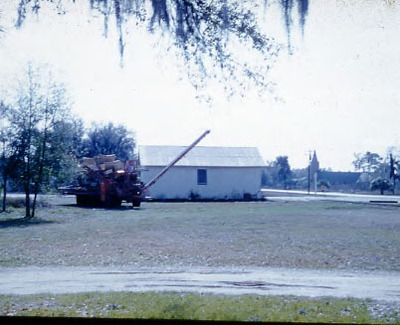 1959 image of area just NW of intersection of SR426 and Redbug Rd.(portion which is currently Slavia Road). Building in photo is a warehouse used by A. Duda & Sons to house their celery harvesting equipment. Interviews of early settlers of Slavia indicate that the very first turpentine shack utilized as a joint worship space ("church") by the new congregation would have been located slightly west (closer to the viewer of this image) of the warehouse. (Camera is pointing eastward for this 1959 photo and St. Luke's (brick) Church can be seen in background.) The settler families used several deserted shacks on the Slavia Colony property for basic shelter upon their arrival in 1911-12, but built homes of their own as quickly as possible. Some founding family interviewees remembered this location as the spot on which the first vacant shack (shanty) to be set aside as "church" stood. In the early 1920s, it may have been the same shack that was then moved to the congregation's new ground ...the site of the current cemetery in Slavia.