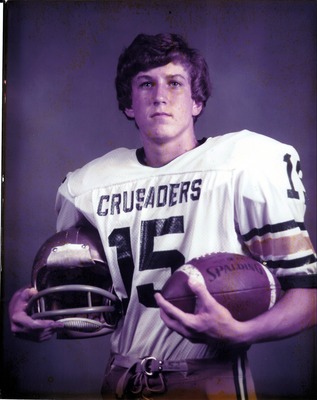 The history of the school's football program was the focus of one publication of Orlando Lutheran Academy ("Vision' Oct.2007, Vol.1-Issue 3). It featured interviews with the first football coach of the school (then named Luther High School) in the 1970s and 80s and with Orlando Lutheran Academy's (2007) football coach, Mike Viera. Also featured were photos and interviews with a member of LHS' first football team, David Duda (LHS class of 1979) and his son, Steven (OLA class of 2009). Steven was also the first offspring of a Luther High School alum to graduate from the school. Included are photos of David taken wearing his No. 15 uniform c.1980.