Children play in the Flower Garden on Dinda Homestead, c. 1920 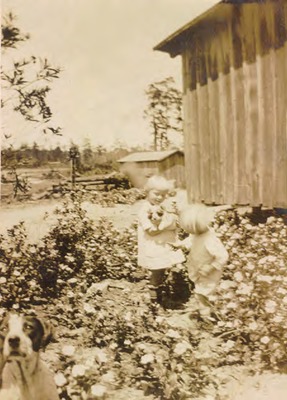 Little Olga Jakubcin (left) and brother, George, Jr. frolic in the flower garden at the Dinda homestead, c. 1920. A black and white dog (probably owned by the Dinda family) can be seen in the left lower corner and Olga appears to be holding a puppy with the same markings as this dog, while brother George tries to pet it. Snapshot (Courtesy: David Jakubcin) scanned at SLLS, 2001, for the church's 90th anniversary display. Image also appeared in Like a Mustard Seed: Like a Mustard Seed: The Slavia Settlement (1982).