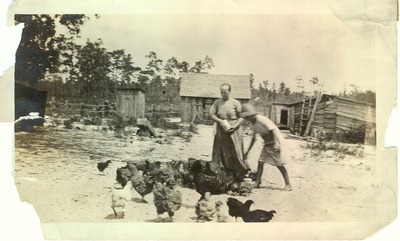 Dinda family women feeding their flock of chickens on the first Dinda farm in Slavia. c. 1915. Mrs. Michael Dinda, Sr., wearing a long skirt and apron, is reaching into a container for chicken feed, while daughter, Helen (barefooted and wearing a hat) appears to be scattering feed to the flock. In the background of the photo are several small primitive outbuildings, ladders and a fence, behind which there may be a garden. Pine trees can be seen in the distance behind the clearing. The snapshot (partially damaged when removed from a family scrapbook at some point) was scanned in 2001 at SLLC and was loaned to St. Luke's by Robert and Peggy Dinda for the 90th anniversary celebration. This image appeared in Like A Mustard Seed (1982), courtesy of the Dinda Family. Scanned from small snapshot (front only), with damaged corners.