Katie Mikler- her birth certificate and marriage to John Duda 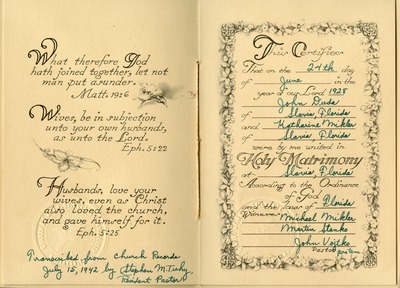 Katherine (Katie) Mikler was born in Ohio in 1910 and began her life in Slavia the very next year, when the Joseph Mikler family emigrated from Cleveland to FL to help found the Slavia Colony. Her birth certificate names her as 'Kate', the 'legitimate child' of Joseph Mikler (age 40-laborer, though he was actually 30) and 'Kate' Strauch (age 25-housewife) and shows the family's address as 2981 E. 81st St. in Cleveland. The family's origin is incorrectly listed as 'Slovania,' rather than Slovakia. Katie was delivered by a midwife named Anna Jakl. Eighteen years later, on June 24, 1928, Katie was married to John Duda (Sr.) in the first wedding to be held in the little wood church. Rev. John Vojtko (visiting pastor) served as the officiant. The wedding was witnessed by Michael Mikler, ml. ("mladsi"-younger, the bride's brother) and Martin Stanko. But the marriage certificate was not prepared and recorded until July 15, 1942, when St. Luke's own first pastor, Rev. Stephen M. Tuhy (installed in 1934) went through the old church records and issued proper certificates to those who had been baptised, confirmed or married, before his arrival. Katie Mikler Duda passed away on August 9, 1974,; Birth and Marriage Certificates scanned on Epson 10000 XL at SLLC, April, 2012