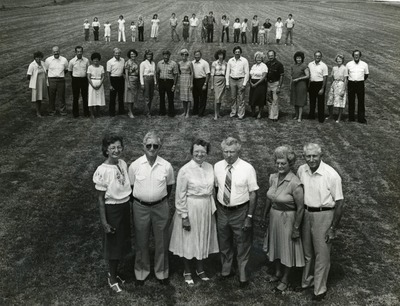 In a photo taken by the "Orlando Sentinel" and posed on the Oviedo farmland of A. Duda and Sons in 1981, three generations of Duda family members can be seen. The three sons of Andrew Duda, Sr. (who passed away in 1958) stand in the front row with their wives. Left to right: Julia and John Duda, Sr.; Elizabeth and Andrew Duda, Jr.; Anna and Ferdinand Duda, Sr. The second row contains some of the (14, total) children and spouses of these three couples: (left to right)1-2. Eleanor and Bruce Hrncir 3-4. Walter and Judy Duda 5-6. Andy L. and Pat Duda 7-8. June and Ferdinand S. Duda 9-10. Sandra and Michael Duda 11-12. Theresa and Joseph Duda 13-14. Betty and John L. Duda 15-16. Melanie and Luther Duda 17-18. Sadye and Edward Duda In the third row (unidentified here)are some of their grandchildren. The photo was used for a feature about the family in the "Orlando Sentinel." A print of the photo was given to family members as a gift