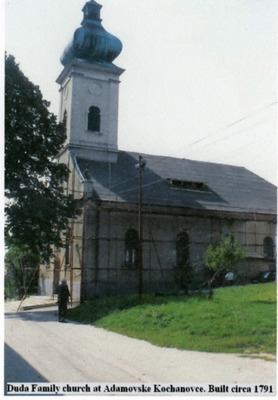 Three photos, taken in 1994, of the Duda family's ancestral church in Adamovske Kochanovce, Slovakia. The church (exterior view), built in 1791, underwent some restorations at this time. The chandelier seen on the interior image of the altar and chancel area, was the gift of John and Katie Duda several years before. Jaroslav Duda, Sr. (nephew of Andrew, Sr) sits in the "family pew" with Walter Duda, who is visitng from the US in July, 1994. Also, a photo of the interior of the same church (2001) which appeared in the book, "Evanjelicke kostoly na Slovensku"(Tranoscius).