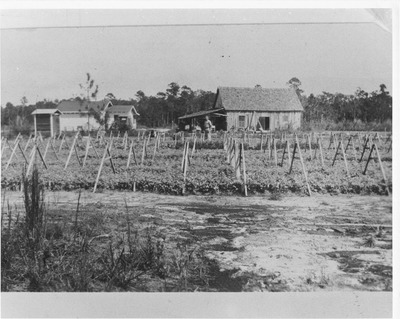 A view (from west side of Mikler Road) of the home built by the Andrew Duda, Sr. when the parents and three sons returned in 1926 from a 10 year hiatus in Cleveland, to begin farming in Slavia, Florida. Note the barn, which was used to cook family meals until it burned down a few years later, the house (which was enlarged in a short time when oldest son, John married Katie Mikler and the couple moved into the Duda family home), the "outdoor facilities," and the vehicle parked near the house. The man shown tending the Duda's first crop of celery may be son, John, or son, Andy, Jr. It should be noted that this house (with several revisions made in the interim) stood until heavy damages from Hurricane Charlie caused it to be demolished in 2004. The house had served as a temporary home for many young couples in the Duda and Mikler families, as well as for newly arrived teachers in St. Luke's School for over 60 years, so that it came to be known in the community as "the honeymoon cottage."