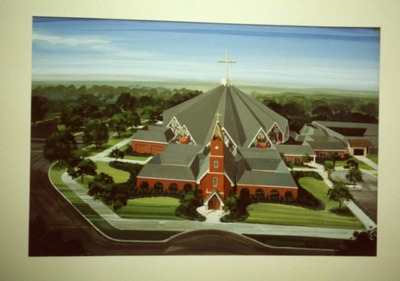 On March 8, 1992, the congregation was invited to view a large architectural rendering (painting) of the proposed church facility, as well as a three-dimensional table-top model of that same structure. In a special meeting of the church voters called in December, 1990, the congregation had agreed to proceed with the building of a new facility. More than a year passed before the members were to see the architectural rendering and model. Contractors' bids for construction, however, were much higher than expected and many revisions (most significantly: the lowering of ceiling as shown in the model and also the decision to use stucco, rather than brick for exterior walls) were made before the congregation signed contracts for the construction of the final architectural version for the facility.