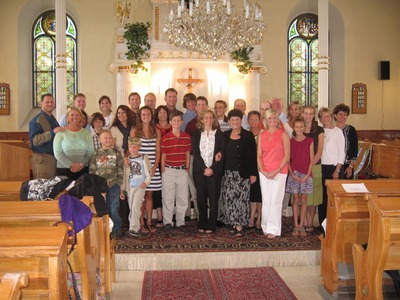 Thirty members of the Duda Family, all descendants (and their spouses) of Andrew and Katarina Duda, pose in the chancel of the Duda family's ancestral church in Adamovske Kochanovce, Slovakia. June, 2009. The pilgrimage to the family church (which was built in 1791) was in commemoration of the 100th anniversary of the emigration of Andrew Duda, Sr. from the Austro Hungarian Empire to America in 1909.