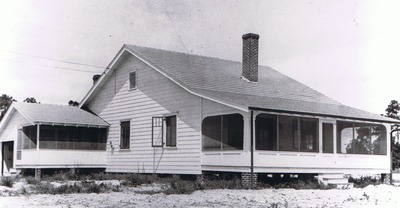 The first home built for the family of John and Katie Duda, c.1940, on Mikler Road in Slavia, was situated on the 40 acre plot purchased by the Andrew Duda, Sr. family from the Slavia Colony Company in 1912. Until this house was erected, John & Katie lived with John's parents and brothers in the first farmhouse the Duda family had built in 1926. But the frame home shown in this photograph burned to the ground c.1950, in the middle of the night after a fire started in the garage. John, Katie and their five children barely escaped with their lives and the few belongings they could gather up before the house went up in flames. A larger, block house was then built near the same site, where it stood until c. 2006, having sustained mortal damages from a falling tree, as a result of multiple hurricanes in the summer of 2004.