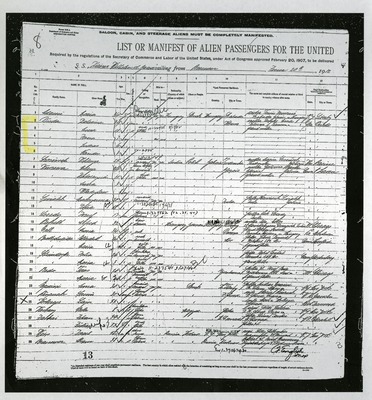 The image of the manifest of the Kaiser Wilhelm, showing the names of Katarina Zatko Duda and her four children, as they emigrated on this ship from Europe to America in 1912. The manifest reveals that ship departed from Bremen on June 20 and arrived at Ellis Island on June 28, 1912.It lists the family's "nationality" as subjects of Hungary and their "race" as Slovak. Former home is listed as Velcice, in Trencin Co and their final destination as Oviedo, FL. Katarina's occupation is noted as 'domestic.' Andrew Duda, Sr., (husband of Katarina and father of the the four children) had emigrated to the US in 1909 and the family was traveling to Florida to be reunited with him.