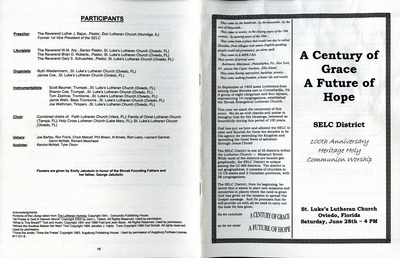 Outer pages of the cover for the Heritage Holy Communion Service at St. Luke's on Saturday, June 28, 2003, celebrating the 100th Anniversary of the SELC. The preacher was Rev. Luther Bajus; officiants were Pastors Wally Arp, Brian Roberts and Gary Schuschke. Organists were Ruth Wiedenmann and James Coe. The Slovak Evangelical Church was established in Connellsville, PA in 1902 by 8 clergymen and 4 laymen representing 14 congregations of Slovak Lutherans...recent immigrants from the Austro-Hungarian Empire. Eventually, this synod of congregations merged with the larger Lutheran Church-Missouri Synod (LC-MS)and became a "non-geographical District" of that Synod. In 2003, the SELC District consisted of 58 congregations in 12 states and 2 Canadian provinces. The centennial celebration was dubbed "A Century of Grace- A Future of Hope."