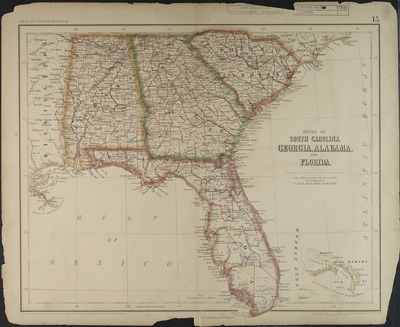 Map of South Carolina, Georgia, Alabama, and Florida by H.D. Rogers and A. Keith Johnston; engraved by W.andand A.K. Johnston, Edinburgh. Map denotes counties and districts, relief shown by hachures. In the upper margin of the map is printed: Atlas of United State & Map was "Entered in Sta. Hall, London and according to act of Congress in the year 1857 by H.D. Rogers, in the Clerks office of the District of Court of Massachusetts. Map appears in: Atlas of the United States of North America (London: Edward Stanford, c1857) plate 15. Map scale [1:3,450,000] 54 1/2 miles to 1".