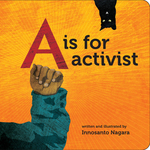 A is for Activist

A is for Activist is an ABC board book written and illustrated for the next generation of progressives: families who want their kids to grow up in a space that is unapologetic about activism, environmental justice, civil rights, LGBTQ rights, and everything else that activists believe in and fight for. The alliteration, rhyming, and vibrant illustrations make the book exciting for children, while the issues it brings up resonate with their parents' values of community, equality, and justice.

Nagara, Innosanto, "A is for Activist" (2013). Diverse Families. 13.
https://stars.library.ucf.edu/diversefamilies/13