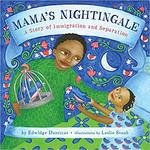 Mama's Nightingale: A Story of Immigration and Separation

When Saya's mother is sent to jail as an illegal immigrant, she sends her daughter a cassette tape with a song and a bedtime story, which inspires Saya to write a story of her own -- one that just might bring her mother home.