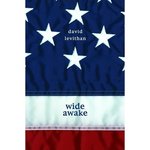 In the not-too-distant future, when a gay Jewish man is elected president of the United States, sixteen-year-old Duncan examines his feelings for his boyfriend, his political and religious beliefs, and tries to determine his rightful place in the world.