Please begin by reviewing About the Course for an introduction and orientation to the 2020-2021 Afrofuturism Syllabus, which bridges the organizing themes of the first two years of the five-year Afrofuturism Conference Cycle: "What is Afrofuturism?" and "What is the Sound of Afrofuturism?"

Note: Each week the course coordinator will release new content related to the conference themes. Content posted here will remain publicly accessible and may be incorporated into other courses, in part or in full, via links to this site. Suggested citation: French, Scot. Syllabus for ZORA! Festival Afrofuturism Course, University of Central Florida, Orlando, Fall 2020-Spring 2021. STARS, https://stars.library.ucf.edu/afrofuturism_syllabus_about/.

In the Conversations segment we share interviews and panel discussions featuring participants in the 2020-2021 ZORA! Festival Afrofuturism Conference.

The week features a 30-minute "framing" interview with Dr. Julian C. Chambliss, curator of the Festival’s 2020-2024 Afrofuturism Conference cycle. Dr. Chambliss revisits the 2020 introductory conference theme, "What is Afrofuturism?", offers his own definition, and references a wide range of Afrofuturist thought/expression in comics, music, literature, and film.

From an historical perspective, Dr. Chambliss explains how Afrofuturism informed the founding of Eatonville, Florida, as an historic Black township; infused the literary-scholarly works of Zora Neale Hurston; and provides the ideal framework for the ZORA! Festival in this "Afrofuturist moment." Holly Baker, Archivist at the Library of Florida History and Public History Coordinator for the Florida Historical Society -- and a familiar voice from the Florida Frontiers radio program -- conducts the interview as part of the Every Tongue Got to Confess podcast series. Dr. Chambliss and Ms. Baker produce the podcast series, currently in its fifth season. 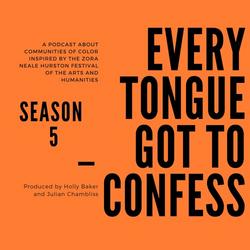 In addition to the featured conversation with Dr. Chambliss, Week One offers a series of brief, 2-minute interviews with participants in the 2020 Conference. Recorded by Rhea Posey and Nulieta John for Preserve the Eatonville Community, Inc., these clips capture the excitement of the event as it unfolded at UCF Downtown over two days last January.

In the Explorations segment we pose a series of questions for further investigation and class discussion, based on the featured Conversation.

Dr. Chambliss defines Afrofuturism as "Black speculative practice that critiques the status quo and projects a kind of liberatory vision for the future." What fields of intellectual/creative activity come first to mind when you hear that definition?

Dr. Chambliss continues: "I think whatever Black people imagine is kind of Afrofuturist by default, so Afrofuturism doesn't necessarily have to be about the future per se. Every black person alive, whenever they are alive, is looking towards the future. There is a certain kind of time politics in Afrofuturism that makes all Black people who are struggling toward liberation part of the same sort of intellectual movement. It's that mix of speculative practice and liberation that I think of as core to Afrofuturism." Do you agree? Discuss.

Dr. Chambliss and others argue that Afrofuturism -- a term coined in the 1990s -- is present in the work of Black writers and orators dating to the 19th and early 20th centuries. What, in his view, makes Zora Neale Hurston an ideal subject for Afrofuturist interpretation?

Dr. Chambliss specializes in the study of cities, both "real and imagined." In the interview, he notes that the mythical kingdom of Wakanda is perhaps the best known example of an Afrofuturist city but quickly adds: "There’s more to it than Black Panther." How -- in his view -- might we see late 19th/early 20th century historic Black towns and settlements, such as Hobson City, AL, Mound Bayou, LA, and Eatonville, FL, as Afrofuturist in design?

Dr. Chambliss references a number of contemporary (post 1970s) musical artists and writers whose sound / performance style is associated with Afrofuturism. We will be returning to this theme -- "What is the Sound of Afrofuturism?" -- later in the course. For now, try Googling "Afrofuturism" and one of these artists. What do you find?

Published exclusively online twice a year, in the winter and summer, the Journal of English Learner Education is a scholarly refereed journal. It is grounded in the disciplines of second language acquisition, bilingual education, and English as a second language, but its purpose is to integrate research and best practices in a variety of fields as they relate specifically to the success of English learners in grades P-16.

The Journal of English Learner Education invites manuscripts in three areas: Research and Theory, Effective Practices, and Commentaries. Manuscripts can be submitted for review electronically on a rotating basis.

The journal is funded in part by a grant from the Office of English Language Acquisition, US Department of Education.

Please contact the editor, Dr. Kerry Purmensky, at , with any questions.

Individuals interested in becoming a reviewer for The Journal of English Learner Education should contact the Journal’s Managing Editor at .

The Journal of International Crisis and Risk Communication Research (JICRCR) is the first scholarly journal dedicated to human and mediated communication issues associated with crises, risks, and emergencies around the world. The journal is supported by an international editorial board comprised of top crisis and risk communication scholars. JICRCR is a biannual peer-reviewed, open access publication, which means that all content is freely available without charge to the user or institution.