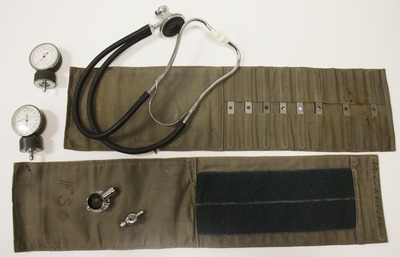 The Taylor Instrument Company originally started out in 1851 under the name Kendall and Taylor, founded by David Kendall and George Taylor. When David left in 1853, Frank Taylor joined his brother and it became Taylor Bros. Corporation. In 1907 the company reorganized itself and began using the trade name Tycos, the brand under which this stethoscope and blood pressure cuff are made. The cuff would have come with a leather case.