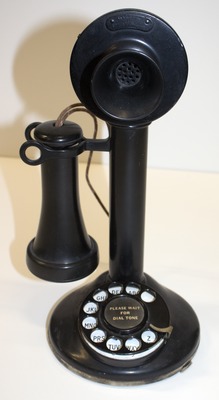 The Bell Telephone Company was formed in July 1877, not so long afer Alexander Graham Bell made his first successful call. What resulted was the giant monopoly known as the "Bell System". Following a lawsuit against Western Union in which the company gave up all of its patents, claims, and networks, the American Bell Telephone Company was chartered. With this, in 1881, they purchased controlling interest in the Western Electric Company. The Western Electric Dial Candlestick was the first phone with a dial and buttons, making the phones automated and not requiring operator assistance.