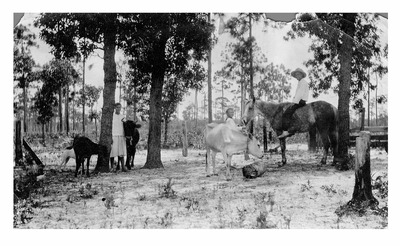 Dinda Family children (c. 1915) with several cattle on their homestead in Slavia. Left to right are: Susan Dinda (with young bull and 2 calves); Helen Dinda (behind white heifer); John Dinda (wearing hat, bareback on horse). Image was scanned (2001) from photo loaned to church for 90th anniversary celebration by the Robert Dinda Family. The edges of the snapshot were damaged when it was removed from a family album in previous years. The children's names were handwritten in blue ink on the front of the photo and are visible in the bottom margin. This image appeared in "Like A Mustard Seed: The Slavia Settlement" (Wehr: 1982), courtesy of the Dinda Family.