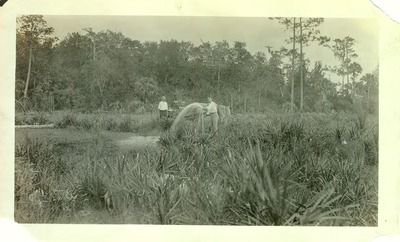 Michael Dinda, Sr. (left) and his son, Michael, Jr. are shown with the active artesian well on their homestead in Slavia, FL, ca. 1915. A pine forest can be seen in the background, with indigenous palmettos in the foreground. There appears to be a horse and buggy standing behind the stream of water emanating from the well. The snapshot was scanned in 2001 and was loaned to the church by the Robert Dinda family for St. Luke's 90th anniversary. Corners of the snapshot were apparently damaged when it was removed at some point from a family album. This image also appeared in Like A Mustard Seed: The Slavia Settlement (1982), courtesy of the Dinda Family. Snapshot: front only.