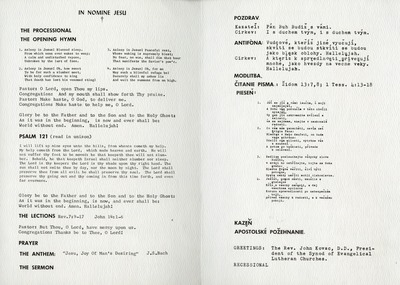 The four page folder of the English/Slovak funeral service prepared for St. Luke's first pastor, Rev. Stephen M. Tuhy (B. October 14, 1909 - D. December 26, 1967). Pastor Tuhy had served St. Luke's from the summer of 1934 until his sudden death on the day after Christmas in 1967. (Ironically, Dec. 26th is known as St. Stephen's Day and was the "nameday" of Pastor Tuhy... a day which, in the Slovak tradition, was celebrated along with birthdays.) Pastor Tuhy was survived by his wife, Olga 'nee Pankuch (married June 7, 1936 in Wilkes Barre, PA) and four of their 5 daughters: Rebekah Tuhy Killen, Naomi Tuhy Klett, Priscilla Tuhy and Lydia Tuhy. Their daughter, Elena, preceded her father in death in 1958. (His widow, Mrs. Olga Tuhy, lived for the remainder of her own years at the Lutheran Haven Retirement Center and passed away on February 8, 1988. Both husband and wife are buried in St. Luke's Cemetery in Slavia.)Pastor Tuhy's funeral service involved several officiants and was "bilingual" (portions of the service, including the sermons, were offered in both English and Slovak. Rev. John Kovac, the President of the Synod of Evangelical Lutheran Churches presented greetings and the condolences of the national church body. For the people of St. Luke's, Pastor Tuhy's unexpected death marked the end of an era of stable and visionary leadership under the only pastor they had ever called their own.