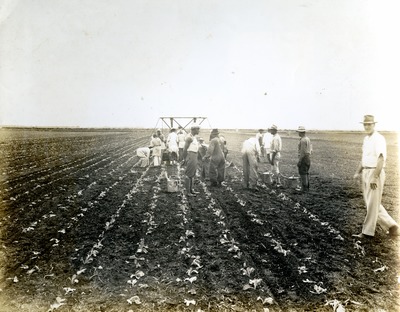 Views from late 1920s of the acreage Andrew Duda, Sr. had purchased from the Slavia Colony Company in 1911-12. After a 10 year hiatus (1916-1926), during which Andrew and his family returned to Cleveland to earn more capital for their agricultural ventures in Florida, the family returned to Slavia, built their first home on Mikler Road in 1926 and proceeded to cultivate their acreage. Images show celery fields and a number of hired workers. By this point in time, Andrew's daughter, Anna, was the wife of George Jakubcin (a carpenter and builder),but the three Duda sons joined with their father in forming an agribusiness which became known as A. Duda & Sons, Inc. During the years to follow, the company increased its land holdings far beyond the 40 acres the family had originally homesteaded.