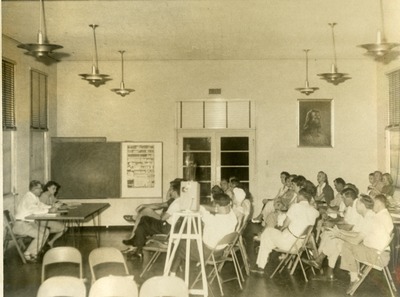 An important feature of the first permanent school built by St. Luke's in 1947 was an auditorium. The stage was used for many plays produced by members of the congregation, as well as for school performances. The open space was used for wedding receptions and other gatherings and later became the site of the school library. After the construction of a large new school in 2000, the former auditorium was used for Shepherd's Hope medical ministry, for Lutheran Counseling Services and other purposes. In 2010, St. Luke's moved its rapidly-growing Pre-K program into the original school building and further modified the former auditorium for office and lobby space. A 2015 digital image shows the entry area in its most current emanation.