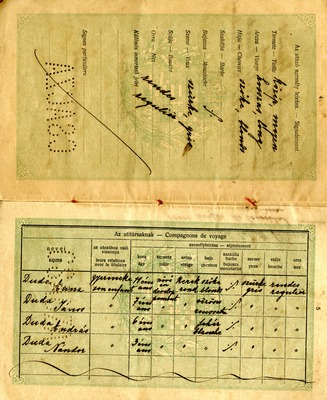 The passport used by Katarina Zatko Duda and her four children when they emigrated from the Austro-Hungarian Empire to the US to join the family patriarch, Andrew Duda, Sr., who had arrived in the US in 1909. The passport (written in French) was issued in May, 1912 "in the name of Emperor Franz Joseph." The Duda family was ultimately reunited in Slavia, Florida in the same year. The Passport was found in the belongings of their only daughter (Anna Duda Jakubcin) in 2012