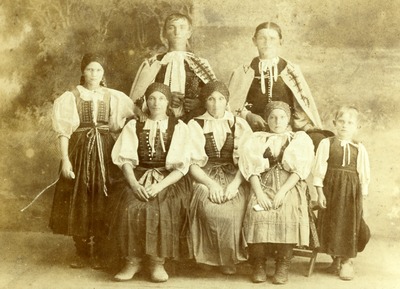 Four photos of unidentified acquaintances.. possibly even relatives... of Andrew Duda and/or Katarina Zatko Duda. Photos were taken in Trencin,the city in Slovakia (once part of the Austro-Hungarian Empire) that was closest to the village of Velcice where the family lived. The photos are not dated, but at least one of them was addressed to the family in Velcice, before the Duda family emigrated to the US in 1909-1912. It cannot be confirmed that the people shown in the images are actually relatives of either the Zatko or Duda family, but the possibility exists. The photos were re-discovered in 2012, buried in the belongings of Katarina Zatko Duda, which were handed down to her only daughter, Anna, after the mother's death in 1934. Anna Duda Jakubcin is also deceased and no living member of her family is able to identify the subjects in the photos. The images, however, are of interest because of their personal connection to the families and also because they portray the costumes and customs of the early 1900s in the region of Slovakia in which the Duda family lived at that time.