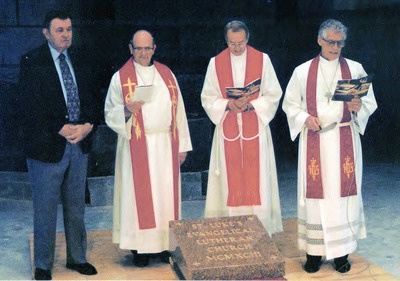 Although the new church building was not yet completed. the members of St. Luke's were allowed limited access in order to have a ceremony as the "Foundation Stone" was laid in the new narthex area. Participating in the ceremony were (l-r): Richard (Dick) Sawyer, President of the congregation; Rev. Albert Marcis, President of the SELC District; Rev. Dr. Glenn O'Shoney, Executive Director of the LCMS Board for Mission Services and Rev. E. J. Rossow, pastor of St. Luke's. Four "time capsules" (8" diameter PVC tubes) had been filled with mementos, historical documents and letters meant to be read by future generations, then sealed and placed into a concrete container under the floor. After the brief ceremony, the marble capstone (aka foundation stone) was placed on top and grouted into place. The stone and the contents of the time capsule remained in this spot (close to the baptismal fountain...slightly to its west) until early in the congregation's Centennial Year in 2012. At that time, the narthex area was revised to accommodate the need for a larger gathering space for congregants. Planters, built into the floor in 1993, were removed completely and the foundation stone was moved to another area (near a window on the north wall) of the narthex. The 1993 time capsules were removed, opened and additional memorabilia, reflecting the Centennial, were added before being placed back into the concrete holder and resealed for posterity.