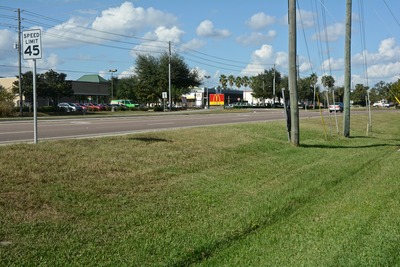 When the representatives and land agents for a group of Slovak immigrants in Ohio explored possible Central Florida sites in 1911 and recommended the area which became known as Slavia Colony, no one could possibly have foretold that the land on which they stood in this historic photograph would change so drastically in the century to come. First it was used as farmland by the settlers; the nearby railroad served to transport their crops to market. For a time the land depicted in the photo lay fallow, but it was eventually purchased by developers and the old fields became concrete parking lots for the new shopping center. The railroad tracks disappeared, to be replaced later by a hiking-biking trail. Digital images taken in 2015 show McDonald's iconic arches in the distance and a commercial listing of the businesses operating in the shopping center.