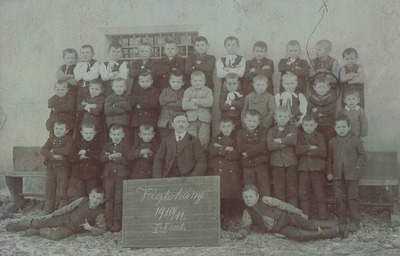 A fascinating image, showing John Duda as a school boy (age 6 or 7) in the village school of Tagkohany, Trencin Co in the 'Kingdom of Hungary,' 1910. Note that this area is now part of the Slovak Republic, but after World War I ended in 1918, it was part of Czechoslovakia for 7 more decades. Young John is at the far right of the middle row(head is circled). Someone in "the old country" mailed this mounted photo to his mother (Katarina) some years later. Note that Katarina brought John and his 3 siblings by boat to the US to join their father, Andrew Duda, Sr. Their ship landed in NYC on June 28, 1912 and John continued his schooling in Oviedo, FL that year.